As a family, we enjoy learning about great missionaries of the faith – whether from the pages of the New Testament and the travels of Paul, or from current day servants who try to spread the wonderful, life-saving news of Jesus in remote places.

Did you know that this month there is another missionary we can glean from as we hear of his longing to reach others for Christ?

I am talking about St. Patrick. 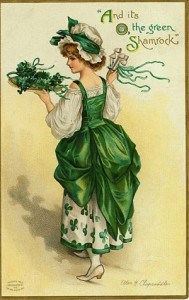 What do we really know of St. Patrick, in who’s honor patrons don green? To look around at the way modern day folk celebrate St. Patrick’s day, you’d think it all had to do with shamrocks, leprechauns, rainbows and the ever famous pot of gold at the end of them. Well, that and the traditional “wearing of the green” to prevent any pinching that might occur on March 17th each year. But there is actually some wonderful truth that we can celebrate at this holiday and can pass along to the children in our lives.

For as far as history can tell, the story goes like this: At about the age of 16, Patrick, a Scottish young man born into wealth sometime in the late fourth century, most likely around 385, was violently captured by Irish raiders and forced into a life of slavery. Patrick later escaped and was reunited with his family, but in a dream, felt called by God back to Ireland to spread Christianity to the people of that isle. So this godly young man set about to make this dream come true.

He prayed for God’s strength and then studied scripture to ready himself. Then He was prepared to return to the land of his captivity. He preached the Gospel and built churches throughout the country until his death on March 17, 461.

For the modern day Irish, St. Patrick’s Day is considered a time for spiritual renewal as they fondly remember the slave-turned-evangelist who spread Christianity to the Emerald Isle. For our family today, we feel we can use him as an example of what a young person, sold out for God can do in their generation.

Just think about this man. How many of us, after being captured and held as a slave and forced to work in a foreign land, when finally set free, would actually return to the very place where we were enslaved? It must have taken a great deal of maturity and immense faith in God’s protection to go back to that island.

And Patrick must have known that spiritual bondage is far, far worse than physical slavery.

In some ways, don’t we see modern day examples of just such a story? The drug addict who finds freedom from a life of addiction through faith in Christ, sensing a call to return to their old neighborhood and preach the freedom and everlasting life Jesus offers. The women who made a bad choice resulting in her and her unborn child both being the victims of abortion. Now she longs to counsel young girls to choose life for themselves and for their precious baby.

All of these people serve as wonderful examples of someone who found freedom and longed to lead others there as well.

So at this time of year, when you spy a leprechaun or see a shamrock, whisper a prayer that God continues to raise up men and women who have been set free to return to the land of their captivity and lead others to the same liberating, life-giving freedom.

And if you want to enter a little giveaway in honor of the St. Patrick’s Day holiday, leave a comment today and you might win a bag of Irish cream and cocoa dusted whole almonds and some of my favorite whole bean Irish cream decaf coffee from Horrock’s Farm Market. (If the winner needs the coffee ground, I’ll grind it for you before I send it)

To enter, simply tell us any of the following:

The winner will be announced Wednesday morning,