Have you ever felt a prompting?

I mean one of those random thoughts that seems to be whispered to your very being saying  “You should call so-and-so” or “Hey….how is your friend Julie, by the way? She’d be thrilled if you sent her a handwritten note and a simple bag of her favorite tea tucked inside.”

Many times, these promptings are God’s spirit beckoning us to act; to be his hands and feet. It just might bless the socks off of someone, and confirm for you once again these facts:

It just happened to me.

Without going into all of the sorted details, suffice it to say that I had a rough week. Not a tragic week. Not a week with bad news or unruly children or difficulty in my marriage.

Just a week of bummers and mishaps and lost time and people who had fires to put out and somehow thought I was the entire New York Fire Department with hoses ready to put out the fires THEY HAD CREATED for themselves since I had nothing better to do!!!!! (This was an unplanned editorial.)

And I had three days of travel for my son’s baseball tryouts for a team near Detroit. And a P31 devotion due. And groceries to get. And a head bleeding when I whacked it on the trunk lock when getting the groceries out of the trunk since no boys we around to help me since they were with the new puppy who had made a deposit on my kitchen floor just before 12 women from my Becoming More Bible study were to arrive after I had returned from getting my hair cut after working out since I still have stinkin’ weight to lose and……

Oh, and did I mention this all took place while I was trying to finalize my notes for next week’s Hearts at Home National Conference? It is on marriage.

Oh yeah…nothin’ puts a big ole bull’s eye on your heart and emotions like trying to talk to ladies about having a marriage that pleases God.

Anyhow–I was in tears Wednesday. My 15-year-old son witnessed my meltdown. He asked why I was crying. What was wrong?

“Nothing..” I replied. And then I promptly proceeded to blubber about how I am such an incompetent mom, awful wife, stink at homeschooling, haven’t cooked a decent meal in days….blah, blah, blah.

He sure got an earful of “nothin'”

(I am preparing him well for his marriage communication reality,  don’t ‘cha think?)

Just then, the doorbell rang. I wiped my eyes and answered it. A strange man stood there holding a beautiful bouquet of flowers.

“Are you Karen?” he inquired.

“Yes sir” I said, trying to stealthily suck the still-dripping snot up my dainty nose.

I smiled, took the flowers from him, went in the house and removed the attached note card, so excited to see who had sent me flowers a full week before my birthday.

It was addressed to ‘Dorothy’.

I began to bawl again. Now, not only had I had a meltdown, then been perked up by the thought of someone sending me flowers, but now had my bubble burst when I noticed they were obviously for the neighbor down the street.

But wait! He had asked if I was Karen! Maybe they were for me after all! I opened the card and it read:

Dorothy, Enjoy your gift in the “Land of Oz” for this next week before you come to Illinois. Love, Glinda

They were from my precious friend and accountability partner Mary who lives three states away. Ladies… NO ONE I know listens to God like this gal.

My kids call her my freaky friend.  Something will happen at our home that desperately needs prayer. A half hour later the phone will ring. It will be Miss Mary asking, “What happened about a half hour ago? I can’t stop praying for you.”

Well, suddenly the whole Dorothy/Glinda lingo made sense. It is because my message for Hearts is called A Marriage Made in Oz.

When I took the wrap off  of the flowers, I nearly fell over. I had just thrown out a bouquet of flowers in the exact same color scheme that I got from helping with our church’s Valentines Day banquet. They were the perfect finishing touch to my Easter decor on my dining room table. I was having my Bible Study gals over and so wanted to run out to the store and purchase a bouquet just like it again but knew we are on a “no spending freeze” due to the extra gas baseball is requiring this spring.. But this arrangement was what God had already planned. 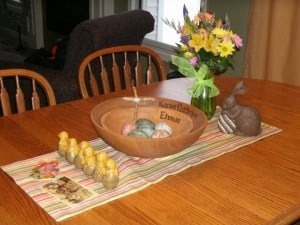 Sweet, yet calorie-free kisses from heaven sent through the promptings of one of God’s girls.

When I called Mary to thank her and tell her of the perfect timing, perfect colors…etc, she just chuckled. She said the Holy Spirit had just given her an urge the night before, “Send Karen flowers. And she has to get them tomorrow.” When she went to pick them out, she was instantly drawn to the type and colors.

Mary, acting in obedience to God’s prompting, completely turned my day around and reassured me that God loves me and understands.

What is God prompting you to do today? For whom?

Do it without delay.

It is so fun seeing God show up!!!