Then you are sure to have conflict. And no time of the year brings more conflicts of the relative kind than the holidays. 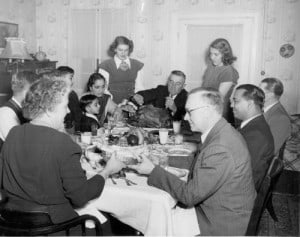 Our lead teaching pastor preached yesterday on handling conflict biblically. Such a practical topic for this week filled with turkeys–both of the edible and uncouth uncle kind. :-)

Several years ago, my accountability partner (and dear friend, fellow writer and speaker) Mary Steinke and I crafted a workshop for Heart at Home called The By-Laws of In-laws and Outlaws. In it we dealt with the topic of extended family and the ways each of us have effectively (and sometimes not-so-effectively) handled conflict.

I thought this week might be a good time to post just a little of our collective thoughts.  For now, let’s start by understanding the three types of conflict that occur between people.

First, we have  inadvertent conflict.

This occurs when someone gets their feelings hurt or gets angry, but it was inadvertent or by accident on their part or yours. It usually involves some sort of misunderstanding over facts or an event.

For example, you plan the family reunion picnic by gathering the best date from those who have a preference. When the date is announced, it lands smack dab on the same day as your two nephews’ soccer tournament . So your sister-in-law says her family can’t come and her feelings are hurt. You don’t understand. You sent out the email. She never responded so you thought they had no preference. It is then she discovers the original email in her spam folder.

Now you are faced with a potential blow up in the family. What do you do?

Take out the emotion.

Stick to the facts.

Try not to be defensive and instead attempt to remedy the situation.

DO NOT dig your heels in and say  “Stinks to be them!” Be gracious and imagine if the tables were turned, what you’d want done in the situation.

Next we have  overt conflict. This is when an extended family member hurts you on purpose and wants you – and maybe everyone else in the family — to know they did it.

They make a back-handed comment about your weight in front of a large group.

Or they question and slam your mothering skills.

What do you do?

At times silence is the best method, especially in a group setting. By barking back you only lower yourself to the childish level they are on and pretty soon you’ve got a playground scrap going.

On the flip side, don’t buy into the lie I did for so many years: that nice, Christian women should just act as a doormat, letting another wipe his/her feet on them while they say nothing.

What happened to the Bible’s admonition to speak the truth in love? What happened is we tend to do just half of that command. Either we bark out the truth in an unloving, inappropriate manner or we just assume the “loving” thing to do is to not speak at all.

What I am saying to you is that from my experience, when it comes to overt conflict, sometimes you do need to go to war but do it politely and firmly.

Finally, we have what is called covert conflict. It is conflict that is disguised.

Covert conflict occurs when it appears on the surface as though this family member is getting along, being polite, or really sorry, but there’s an underlining message that isn’t quite so positive. It’s really passive, aggressive behavior.

Marie, the mom-in-law, often appears to be “helping” Deborah, her daughter-in-law, but in reality, she is plotting harm instead. Like the time she gave Deborah her famous spaghetti sauce recipe to help her poor cooking skills. There were ingredients missing on purpose to insure it would be a flop.

Covert conflict is the hardest to handle, because there’s always a mixed message. They say one thing, but really mean another. Or they act one way when you are in the room and another when you’re not.

If you address the conflict to the person who’s being covert, they will most likely deny everything claiming that they said the right thing or did the right thing and YOU must be misinterpreting their words or actions.

The best way to deal with covert conflict in the family is to realize that what they say and do may not be real or genuine. Then, choose not to put yourself in situations where they will say one thing and act another way towards you.

So when someone in the family baits you and it appears to be a succulent morsel of good will, don’t take the bait without a lot of prayer. Because when we take the covert bait, who gets hurt with hook in her mouth, gets pan fried or fricasseed and finally served up on a platter for all to see?

Remember, they say one thing and mean another. Offer a polite “no thank you, but thank you so much for offering” answer.

Don’t be fooled. Be wise.

Now, a few verses to ponder as we enter this week.

Okay…not just to ponder, to CLING TO!!!!

Romans 12:18: “If possible, so far as it depends on you, live peaceably with all.” (English Standard Version)

Mary and I, as we meet on the phone weekly for accountability on a week when we’ve been around extended family, often ask each other, “Well…how did YOU do?”

Not “What crummy things did someone say to you?”

Or “What covert operations were attempted against you?”

Not, “Did that uncouth uncle or persnickety relative do something mean or hurtful?”

Instead we ask, “How did you do at responding in kindness; at controlling your tongue; at giving a gentle answer when you wanted to throttle someone?

Which brings us to another verse we mention as a fabulous verse to internalize.

When the leak of conflict turns to a trickle, someone needs to stop up the dam before an all-out free-for-all fight ensues.

So, give a soft answer and walk away.

Go scrape dishes, play with the kids, anything to get out of the snow-balling conflict  now gathering ….before you are bawling instead!

Romans 14:19  “So let us then definitely aim for and eagerly pursue what makes for harmony and for mutual upbuilding (edification and development) of one another.” (The Amplified Bible Version)

But remember, you can only control your behavior, never the behavior of others.

If you are going to be heading in to a week with extended family and you’d like a little prayer, feel free to leave a comment today. Mary and I will print them off and add them to our prayer times. (And believe me, when I’m in a battle, there are about three or four sisters with vibrant, powerful prayer habits and deep spiritual lives that I want praying for me. Mary is at the top of that list!)

Just please, be nice. We don’t need names or even titles. Or long, drawn-out explanations of the situation that only Dr. Dobson himself could understand. :-)

Just let us know you need a couple of “I’ve-been-there-and-am-still-there-sometimes” sisters to pray for you.

It would be our pleasure!

Oh, and I’ll be back on Wednesday with a warm, fuzzy post.