In the third row at a Hearts at Home conference in 1996, I was anxious to hear the musical guest for the weekend.

I’d heard the buzz about her: Her debut album, Child of the Father, was released to rave reviews in 1994 earning her a Dove Award nomination for New Artist of the Year. 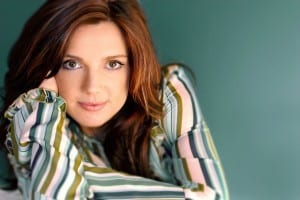 Six albums, nine Number One songs, three Dove Award nominations and a Dove Award win later, Cheri Keaggy is recognized as a mainstay in the adult contemporary and inspirational genres, and songs like “There is Joy in the Lord” and “In Remembrance of Me” are sung in churches worldwide.  Likewise, songs like “Little Boy On HIs Knees (Cameron’s Song)”, “Beautiful Little Girl (Sarah’s Song)”, and “You’ll Always Be My Son” have made her a favorite at women’s events.

Often with her Bible and journal close at hand, Cheri takes a teachable approach to life, looking for the lesson in every experience. “If God can use our challenges and heartaches to build character in us and make us more effective for the Kingdom, than that’s what I want.  He can use me however He sees fit.”

I’ve had the privilege of sharing the stage with Cheri many times. But more importantly, of becoming her friend and sharing a bit of life with her. She is a Christ- follower and worshipper who never seeks to impress but rather to use the gifts she’s been given to glorify God and do the work He has planned for her to do. She faces adversity with God’s courage and determines to use even what Satan means for evil, for good. (And…. she has really cool clothes. I especially remember a red pleather jacket circa 1999 :-))

I am also indebted to Cheri for the genuinely godly role model she has been to my 20-year-old daughter Kenna for nearly a decade. She’s never been to busy to take her call; to listen; to advise; whether chatting about life or the latest styles. Cheri is a treasure!

Now, she stops by to meet you too and to offer two giveaways. And, see she’s giving you a unique chance to partner with her as a friend as well. Read on:

Cheri, how did you first begin writing songs? Well, God used an old friend (actually my ex-husband!) to challenge me to try writing my own music for our old church back in Southern California.  The songs seemed to flow out so easily that I had no explanation for it other than this must be a gift from God.  And the Lord began to confirm that through His people.  My first worship song was “You, Oh Lord, Are My Refuge” which later became a #1 radio single when it released on the CHILD OF THE FATHER album in 1994.

It has been four years since your last album. Now you are ready to come out with a new one. What prompted you to begin writing again?

I had spent a very long season in survival mode, unable to get into that ‘writing space’ as things were unraveling on the home front, particularly my marriage to my high school sweetheart. I had so much on my plate, having to take on many of the business aspects of the ministry.  Still, I went to the She Speaks Conference two summers ago, eager to hear from God, and He used the speakers (and specifically you, Karen!) to remind me that I needed to “do the things I did at first.”  I didn’t know at that time what my future would hold.  And that can be scary. All I knew was that God was calling me to sit my fanny on that piano bench as soon as I got home!  And I knew if I didn’t, I would be walking in disobedience to Him.

Tell us a little about the type of songs that will be on this album.

Oh, I can’t wait to share!  These songs are so real, even raw, a reflection of having walked in some really hard places.  But, at the same time, they are so full of Hope as I continue to cry out to the God Who Sees and discover He is all I need.  We aim to take a more stripped down approach musically, emphasizing my piano and vocals, so the listener is free to focus on the message and emotion of the song.

You’ve set up what I think is a very cool way for your fans to participate in helping bring this project to completion. Tell us about it.

Yes. This is a leap of faith, but my belief in what God can do is strong as He has proved Himself to me so many times through the years. We are inviting Cheri Keaggy fans to help “kick-start” my next album by raising funds through a website called Kickstarter.  Supporters can pledge different amounts toward recording and manufacturing costs and receive incentives as a reward.  If they pledge $100, for example, I will include their name in a “thanks to our ministry partners” section in the album packaging.  Or for $25, they’ll receive a personalized, autographed advance copy of the CD.  Our goal:  Raise $23,500 in 60 days!  Go, God!

Thanks for stopping by today, Cheri!

Thanks for helping spread the word, Karen. :-)

Now–will you take a minute to visit the link about Cheri’s new project? Even a $1 pledge is appreciated. Click here to see the kick-start campaign. Be sure to come back. (and if when you do, you tell us you pledged any amount, your name will be entered in the giveaway twice!) 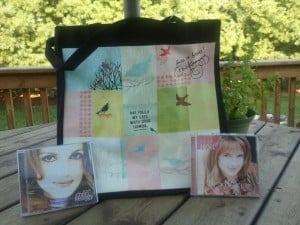 About that giveaway. You have a chance to win either:

~ A cool signed bird-themed tote bag and a copy of her cd Let’s Fly.

How to enter? Leave a comment telling us your favorite faith-based song. (And no, your name will not be entered twice if it is a Cheri Keaggy song!)

I’ll go first. It is a toss up between In Christ Alone by any artist (Newsboys & Owl City both have great versions but my favorite way to hear it is sung by a group of common folk at our beloved Camp Barakel. It is chock-full of great doctrine) and Restored: The Grindstone Song by Cheri. No joke!

Now, what is your favorite? Winners announced Monday.