I am honored to be participating in a blogging conversation about the issue of sexual purity. For a list of all the bloggers writing today about Pure Hope: Bringing Grace & Truth to the Conversation About Purity, click here. 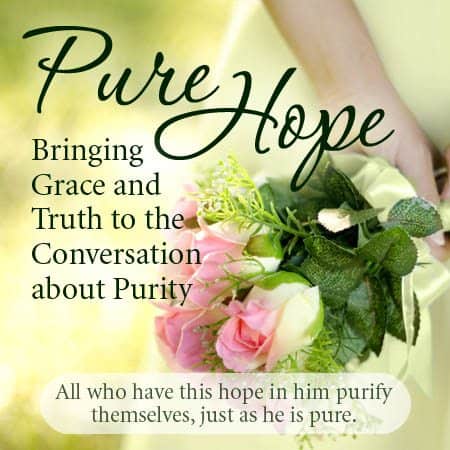 I once knew a woman who said that there were certain verses in the Bible that were hard for her wrap her brain around. Although she believed herself to be a Christian who loved God and followed Jesus, she had a remedy for the hard-to-understand passages. Or the ones she felt came across a bit harsh or felt unloving. And especially the ones that seemed out-of-date culturally.

She just took a permanent Sharpie marker and blacked them out in her Bible.

The topic of purity can be such a Sharpie marker issue. The concept of having sex only in the confines of marriage is laughed at.  Or tagged to be antiquated. Or deemed ridiculous and virtually impossible in today’s current culture. Or mocked on the screens of the televisions, movie houses and computers of the world.

Some who assert that they are followers of Christ say verses that talk about abstaining from sexual immorality or keeping sex only for marriage are in need of a good slash of the ole’ Sharpie. (If you want to read such verses, check out  1 Corinthians 7:1-40 or Hebrews 13:4  or 1 Thessalonians 4:1-9)

This pains my soul. Seriously.

You know what else also pains my soul?

People who pursue purity—-and then? They turn it into an opportunity for public pride.

I am not saying I am against purity rings. My 22-year-old daughter wears a ring that, while it doesn’t say “PURITY” on it, has a special meaning only to her.

It is a ring my husband gave to me the day she was born; a tiny emerald, her May birthstone. He had it resized to fit her when she turned 13. Then, he took her out to the park they had often gone to when she was a young girl. There he told her his story when it came to purity and, with tears in his eyes, told of a better way: God’s way.

He also laced his conversation with grace and love telling of a God of second chances. What that ring means to our daughter and whether she abstains from sex before marriage is between her and God. We, her parents, can’t make her wait. We can only  teach her what God says about the matter. We can share our stories. We can pray.

I am thrilled that there are still weddings where this is the case! HOWEVER, there are a few things that do not thrill me about such announcements.

First, it smacks of pride. Oh, DON”T MISHEAR ME! I ‘m not saying they are being prideful. It just comes across that way. In no other area of obedience to God are we told to announce it to the world. {The whole “When you give to the poor–don’t announce it with trumpets” thing found here.}

It would be like my husband and me standing up in church this weekend to announce that we have been married for 27 years and not once have we cheated on our taxes.

Great to not cheat on your taxes. Wrong to announce it to the world in a “look at me” sort of way.

I’ve also had those who have told my husband and me how—yes, it was announced at their wedding that they had not had sex. But there had been lust and other happenings and plenty of it. However, they would NEVER tell their parents for fear of disappointing them. They had not maintained the standards their parents told everyone they were maintaining and they wouldn’t ever want to embarrass their parents.

Or, there had been no kissing or sexual contact at all! However, the groom had been looking at pornography. A lot. But it was technically true that he was still a virgin so he didn’t even squirm when the pastor told everyone so.

I have also sat with sweet girls who had blown it in the whole purity department but sought forgiveness and grace. They had hit the restart button in this area. However, they were treated as used goods by the Christian community and felt that everyone was staring at them as they sat in the audience at weddings where the virginal status of the bride and groom was announced out loud.

Other people in the room knew they weren’t virgins. A few had even had babies out of wedlock BUT had sought repentance and were following God’s ways. God wasn’t standing over them wagging His finger and saying “Shame on you!”.

God does not see these precious ones as damaged goods. As less than. As filthy.

God sees the heart. As far as the east is from the west is where He casts our sins. So…as brothers and sisters in Christ lets not keep bringing them up again, okay?

Purity is God’s standard. We are God’s people. We should strive for purity; teach and encourage our kids to do the same. BUT we must also  have boatloads of grace for those who do sin in this area and then seek repentance from God. THE SAME GRACE WE NEED DAILY WHEN WE ALSO SIN!!!!

Strive to keep {or regain} the purity.

But do it out of obedience to Him not for recognition from others.