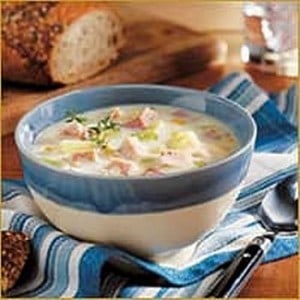 “Mom? Is it ready yet? I’m sooooooo hungry”, my son called from downstairs where he’d just gotten back from baseball practice.

“It” was referring to my cheesy corn chowder soup. It is my kids’ favorite from-scratch fare that I make. Loaded with Yukon Gold potatoes, crisp corn kernels and chopped-up ham, no pot in my home is large enough to contain a batch the lasts more than two days. When I make it, they {and several of their friends} come running.

But I learned something about my steaming soup one day; something that, if not done properly, will make it less-than-appetizing.

It can’t be rushed.

On a crazy-busy day once I tried skipping a step, the one that reads:

Let simmer on low for another hour to hour-and-a-half to thicken, stirring occasionally.

When I omitted this step, the soup didn’t taste so good.

“Mom, did you do something different to the corn chowder this time?” a darling offspring politely asked, brow furrowed, trying to to hurt my feelings. When I heard his question, I taste-tested it {I’d not while cooking it} and I discovered it was thin and flat, not thick and creamy as usual.

All because I’d skipped the waiting, simmering, stirring, just-let-it-be, step.

I thought it was optional. Turns out it is not. It is crucial to securing the desired culinary outcome.

Life is like this. At times I want to skip the sitting, simmering, just-let-it-be times and get on to the big things. The next thing. A more exciting thing.

And so I rush. Fret. Conspire. Brow furrowed, I try to move life’s conveyor belt along so I can ring up my next important and exciting purchase.

I don’t like to sit still and just let my heart stir. It seems so unproductive to this Type A gal. I like to keep moving. Keep doing. Keep producing. Keep the family rolling.

My slogan? “Don’t just stand there. DO SOMETHING!”

But do you know what God has been tapping on my heart and whispering to me lately?

Stand there and wait.

Stand there and embrace the strange feeling of letting my spirit stir in you while you don’t even move a muscle {as my sweet mama used to say}.

Skipping the stirring and simmering step in cooking makes for not-so-tasty corn chowder. And skipping God’s stirring, simmering steps in life only makes the faithful fretful. 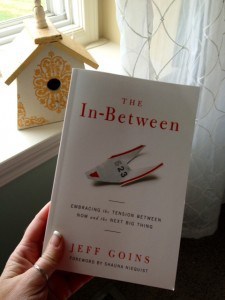 If you need a little….no, a LOT of encouragement to embrace the times of waiting, I’d like to sweetly suggest that you pick up a copy of Jeff Goins’ latest book The In-Between: Embracing the Tension Between Now and the Next Big Thing. Jeff sent me a copy a few weeks ago. Boy did God know I needed this tug on my heart to sit and stir for a while.

Do you need such a tug too?

You can watch the book trailer below.

And you can also try your hand at making my cheesy corn chowder. The recipe is also below.

But remember….do NOT skip the stirring step.

In soup or in life.

{If you are reading this via email, click here to see the video)

In a large pot combine:

Cook, covered, over medium heat for 30 minutes or until potatoes are tender, adding a little more water if necessary. Then add:

1 1/2 cups corn kernels (leftover corn on the cob is great for this!)

Let simmer on very low for another hour to hour-and-a-half to thicken, stirring occasionally.

Salt and pepper, to taste