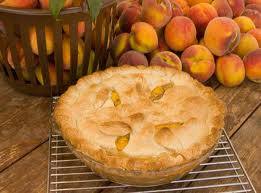 (NOTE: Be sure to read all the way to the end for the giveaway!) When I first married Todd and we lived in a tiny apartment in Three Rivers, Michigan, I loved to putt around in our minuscule kitchen.  The shiny new kitchen gadgets we’d received at our showers and for our wedding were a delight to me.

If you have read my book on hospitality, A Life That Says Welcome, you know I had about zero culinary skills when I began. To make matters worse, I married into a family full of people adept at interior decorating, sewing, baking, cooking and one who even ended up crafting a wildly successful bed and breakfast that was featured in Southern Living Magazine!

Well, I wanted to learn to be wildly successful in the kitchen too!

I started with pies.

Yes ma’am! I wanted to learn to whip me up a from-scratch crust, picked-the-fruit-up-at-a-southwestern-Michigan-roadside-stand, gen-u-ine perfect pie!

So I started with peach, since the fuzzy fruit was in peak season.

And folks, I took it waaaaay too seriously!

I stressed and obsessed.

I peeled and sliced, making sure all the slices were the same size.

I measured and sifted and rolled out the dough.

It was edible, but ugly.

Well, 24 years of practice has found me still making pies.  (And it is true–practice does make perfect. Got myself three blue-ribbon rosettes from the Clinton County Fair to prove it!!!! Yes that is total bragging! But it was also to encourage you. If this Betty Crocker drop-out can learn to do it, anyone can!)

Seriously, pies are so versatile! They can break the ice with a new neighbor, say “I am praying for you” to a troubled family, “Thank you so much!” to the man who fixed your kitchen sink or “We are thrilled for you!” to the couple welcoming their first baby.

It has been a pie week around here.  In our circle of friends pies were needed for two families who lost loved ones, one who welcomed baby number six, a dear grandpa of my son’s friend who ran him to baseball games at times we could not and we wanted to say thank you, a new friend who stayed home from work with a serious case of vertigo and couldn’t cook for her family, and yes, the friend who worked on the plumbing under my kitchen sink (uh…even thought that was many weeks ago and I’m just now getting him his promised peach pie. Sorry Doug!)

So, the total so far this week?

Now, while there are times I can make my blue-ribbon, flaky, from-scratch crust, let me just say, those roll-out refrigerated kinds work wonders too!!! And I did me some shortcut rolling this week to save time and my sanity.

Yes, I still love making pies. And I love the look on the faces of friends and strangers when I deliver one.

How about you? Will you set aside time this weekend to ask God who might be encouraged or cheered by a pie made from your sweet hands? Here are a few EASY recipes to get you started. (I’ll post the from scratch crust recipe here too for the brave.)

1 can cream of chicken soup

1 bag Freshlike frozen vegetables for soup (don’t just use mixed vegetables, find one that has potatoes in it too)

Mix all but crust in a large bowl. Add salt and pepper to taste. (I use about 4 shakes of salt and 6-8 of pepper.) Roll out one crust in a pie pan, leaving the edges hanging over.

Place ingredients from bowl into crust. Roll out second crust on top. Use your fingers to crimp edges of both crusts tightly together to seal. (I like NOT to have them hang over the edge of pan, but instead push them in close to the pie so the edge of the pan still shows. This prevents the edges of the crust from burning.)

Seal well with Saran wrap. Add a note that says: “Bake at 350 degrees for one hour.” Note: if they’d like to freeze the pie for later, it will be all wrapped and ready. Just make sure they know to fully thaw it before baking or it won’t be done in an hour.

(This recipe is taken from the 1963 Martha Dixon Cookbook. She was a local Lansing, Michigan TV personality whom my mother loved. Her cookbook was re-released in 1984 and my mom bought me a new copy for a bridal shower gift. It is now vintage with splashes and stains, the way a cookbook should be!!!)

One box roll-out refrigerator dough (or from-scratch recipe below)

Mix all but butter in a bowl. Turn into a crust-lined pie shell. Dot the top with butter. Cover with remaining edges. Crimp tightly, pushing toward pie and not leaving crust on the edge of the pan. (This prevents burning). Bake at 425 degrees for 30-40 minutes until bubbly.

6-8 tablespoons of water from melting ice (seriously–cold tap water will not work, so get out a bowl, fill it with  ice and let it begin melting a while before you begin).

Mix flour and salt. Cut in shortening with a pastry blender (or two forks if you don’t have one) Stir water in lightly to form a ball. DO NOT HANDLE TOO MUCH! It will make the dough tough, not flaky. Divide in half and roll out on a well floured counter to make a circle just a bit bigger in diameter than your pie pan. Repeat with top crust. Follow recipe for your favorite pie.

Okay–now for the giveaway. Leave a comment from now til midnight PST Sunday on pie. What kind of pie you like. What pies  you make. Why you have never, ever made a pie. A funny flop-of-a-pie story. What kind of pie your hubby likes. Anything! One random winner will be chosen to receive a copy of my book A Life That Says Welcome along with a Paula Deen Apple pie-scented candle and a gen-u-ine kitchen pastry blender.